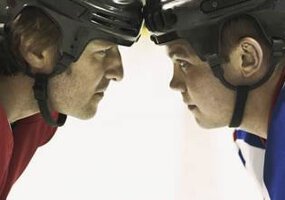 Though Ice Hockey may have a strong popularity in certain places, it is still not as renowned as the most popular sports in the world such as basketball, football and baseball. The game is exciting, it looks unquestionably thrilling and will surely make any sports enthusiast's blood pump in excitement, however, there are more people out there that doesn't have any idea about how the game works, especially the rules for ice hockey. This wall has impeded the growth in popularity of the game and if you're one of the people who would like to know more about it, then you're surely at the perfect place.

There should also be two nets for the game, placed on each side of the team and should have goaltenders to guard them. The two nets should also be made with strings of nylon at its back portion and should have a width of six feet and a height of four feet. Just like any other sports, the objective of Ice Hockey is very simple, it is to defeat the opponent by scoring more points than them. This is extremely simple but the nature and environment of the game makes it outstandingly exciting.

Each team should also have six players wherein five will take the position of skaters while the remaining one will guard the net as a goaltender. Every skater has limitless power on the ice as they can move anywhere on the platform even though they are separated by further divisions - two assigned for defense and three that are considered as the forwards. The goaltender, however, has limited movement as he isn't allowed to cross the center line of the rink.

There are more to the rules for ice hockey other than these basic ones. However, judging from this rules of ice hockey, it is easy to see just how simple the game is and how incredibly entertaining it can be for any sports enthusiasts.